Our speaker Rupert Kirkwood, a retired vet, is now an ardent kayaker. He therefore aptly entitled his talk “Up the creek and……beyond”. Since his enforced early retirement some 15 years ago he has kayaked around the coast of South West England and up most of the rivers as well, covering some 20,000 miles in the process. The silent approach of his kayak has enabled him to get very close on a number of occasions to a range of wildlife, and he has had some amazing experiences, such as beavers and otters as well as swimming badgers and roe deer. He witnessed a stoat attempting to lure some mallards to come within striking distance and a crow that tried to steal a newly hatched baby duckling as it’s mother took her brood down to the river for the first time. He also showed a video of a great crested grebe struggling, but successfully swallowing a large pike. In fact given half the chance, the pike would have swallowed the grebe!

Many of the Devon and Cornish fishing villages were pictured from the flat calm sea backed by a pale blue sky. Real tourist boards snapshots – idyllic. However, it was when he went out to sea on lovely calm days that he got his real surprises. One day last August off Berry Head, he had some 30 dolphins and 14 porpoises. Some of which were leaping twelve feet out of the water and even swimming under his kayak. On another day on the coastal waters of Penzance, he not only saw the hump of a humpback whale, but saw it breaching as well. He has seen bottle nosed dolphins in Mounts Bay and Risso’s dolphins near the Brisons rocks between Sennen and St Ives. In fact so relaxed is the wildlife around him that on one occasion a seal hauled itself out of the water and rested on his kayak.

On one lucky day he saw another humpback whale and a minke whale within minutes of each other off St Michael’s Mount and during the same day he had common dolphin, porpoises and a giant blue fin tuna. During his trips he has observed an exceptional number of great northern divers several miles off shore. He had only just come back last week from a trip to Antarctica so we were the first people to see some of his photographs of wildlife in that area. His greatest impression was of an endless expanse of snow and rocks, devoid of any vegetation, reflected in the dead still, calm sea and apart from the chatter of the terns and the cackle of the gentoo penguins, the extraordinary silence. He was lucky enough to see a snow petrel and they also came across a mother humpback whale with her calf asleep on the surface of the water.

What an incredible show he put on in his relaxed, laid back manner with not only superb colour photographs but lots of video clips complete with sound effects. We really could have stayed and watched all night. The only comment was “fantastic”. My thanks to all those who attended our Annual Indoor Meeting and in whatever way they helped to make it an enjoyable and profitable evening.

We set off under dark skies and continuous rain, skirting along the southern edge of Exmoor to our destination near the south eastern coast of the county. The Seaton Wetlands is a relatively new nature reserve created in 2008 alongside the River Axe. It comprises of a large area of saltmarsh, reedbeds and tidal lagoons. These can be viewed from a number of excellent hides, one of which, the island hide, is situated out in the middle of the flooded wetland and accessed by a man made walkway. A number of artificial islands within the flooded area have been created. On one island close to the hide, a couple of large white eggs could be seen among the reeds, thought to be those of a pair of guarding Canada geese.

Last year the reserve won a Green Flag award given for it’s high quality of management. Soon after we arrived, donning our walking boots, the clouds rolled away and the sun made a welcome appearance lifting everyone’s spirits. Signs of Spring were all around us as we made our way along the path to our first hide. Alongside us the blackthorn had burst into flower and we were serenaded by a dunnock in full song. We passed occasional clumps of celandine with their yellow petals showing brightly against the green of the verge-side grasses.

After a short stay in the first hide where a brown rat was seen feeding on the spillage from the bird feeders, we decided to head for the hide at the northern end of the reserve. This required a more lengthy walk over largely unsheltered terrain. After a few yards some dark clouds rolled in and we all dived for cover provided by a circular shelter which had a roof of reeds and supported by wavy wooden poles. The rain shower quickly passed and we continued on our way to the hide. Another heavy shower greeted our arrival, but this turned out to be the last of the day leaving us once again in bright sunlight together with the remnants of a rainbow. As we sat in this hide scouring the countryside with our binoculars, a tram passed by, not 15 yards in front of us, as it rattled along the Seaton tramway alongside the River Axe. It’s passengers were like minded birdwatchers with whom we exchanged hand waves as they passed!

Retracing our steps we headed for the “Island hide” where we ate a leisurely packed lunch whilst watching a pair of moorhens showing signs of mating behaviour. Some of the birds were displaying wonderful seasonal colours. Most outstanding,  were the bright orange beaks of the oystercatchers and the green heads of the mallards resplendent in the Spring sunshine. The sighting of the day was a peregrine sitting motionlessly on a bank overlooking the river!

Our last visit was to the hide at Seaton Marshes, a short distance along the river, which produced tufted duck, little grebe and a chiffchaff. Walking back from the hide we decided to walk around an adjacent pond where we encountered a beautiful pair of mute swans which allowed us to pass without any fuss. Shortly afterwards we came across an elevated owl nesting box which had now been taken over by the resident kestrel. A perfect end to our day before travelling home back to North Devon and being greeted by a full moon. 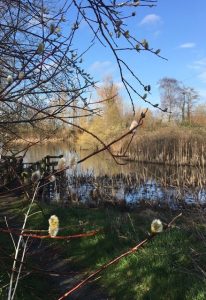